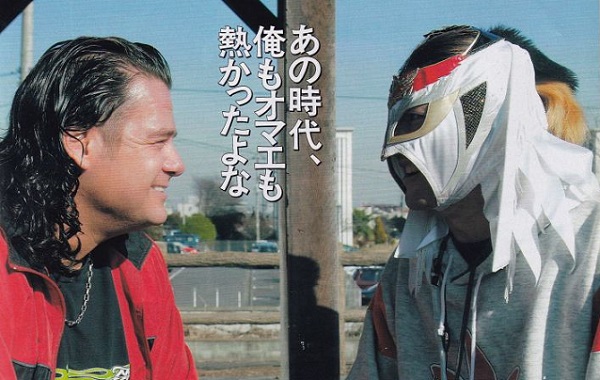 Interviewer: "How is Hayabusa? If he's in the hospital, I'd like to visit him somehow." is what The Gladiator, who returned to the All Japan ring recently, told our staff of this magazine with a serious look. It was in the middle of an All Japan tour when he asked.

When I contacted Hayabusa about it, he agreed. After adjusting the schedule, one afternoon in February, The Gladiator visited a hospital in the suburbs of Tokyo where Hayabusa was working hard on rehabilitation. When we came up on the elevator door opened of the floor where the Hayabusa's hospital room was located, a real-faced Hayabusa was sitting in a wheelchair waiting with a big smile. The Gladiator hugged Hayabusa unintentionally. The reunion for the first time in three years between the two was a fascinating moment.

Hayabusa Its been three years since I have talked to him.

Gladiator: That was at the time that Hayabusa came to WCW. It's a shame. I wish we could have fought.

Hayabusa: I went to the United States to meet Mr. Muto (Keiji). I was preparing to have a match in my costume. However, I was told I did not have a wrestling license just before the match. Before this meeting, I was watching my match with Mike at the Grand Slam Tournament. 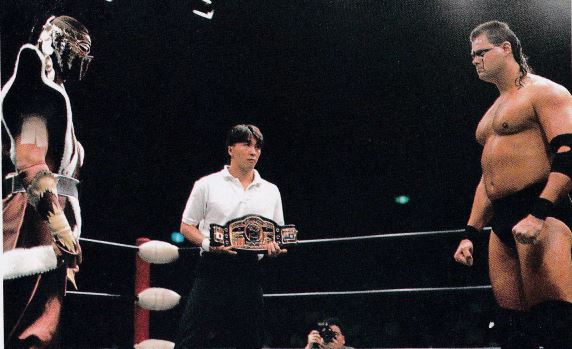 The Gladiator: The match from eight years ago. I remember. There was a wrestler that had that on video tape who gave it to me, but I lost it and haven't been able to watch it haha.

Hayabusa: Oh there were two Grand Slam videos. Both included our matches. I will give them to you later.

Hayabusa: I had wondered if the news had been transmitted to America because of the internet.

The Gladiator: What happened to you on that day? I was worried you were going to die.

Hayabusa: I felt like I was dead for three months until I had heart surgery.

The Gladiator: Heart surgery? I never heard about that Why?

Hayabusa: I caught pneumonia and the bacteria entered my heart and my fever would not go down for about two months, so I stayed in the ICU room all the time.

The Gladiator: That's crazy. The information here was confusing. Most people just said you were okay but that's why when I came to All Japan I requested to see you to find out for myself. I had a lot of anxiety about seeing you again, but I am glad I get to see your complexion again. I remember when you were training with me in America. You had a nice complexion.

Hayabusa: Before I returned to Japan from my training, I stopped by in Florida and trained there with Mike and Horace Boulder. At the time, I was trying to gain weight, but I was practicing every day next to Mike with him screaming "Come on Hayabusa!" it gave me tension and made me sick haha.

The Gladiator: Haha. Push! Push! You're strong because you endured it.

Hayabusa: Mike was a good coach that made me stronger haha. I'm fine now though, although a little older now.

The Gladiator: That's right I am 38 years old now. I came to Japan for the first time at 25 years old. A couple of white hairs have started to come out. My true hair color is brown, but now I dye it black to hide my white hairs haha.

Interviewer: The fights with Hayabusa is still engraved in your mind and body isn't it?

The Gladiator: I still remember at Korakuen Hall hearing the fans not only chant "Hayabusa!" but they would also chant "Graji!". It was my first experience like that, so I will never forget it.

Hayabusa: At that time, I vowed with Mike to fight to erase the Onita color in order to bring out a new color back when I was in Florida. I remember Mike asking me "what kind of wrestling style are you going to do when you go back to Japan?" and when I said "wrestling oriented" he said "I was thinking the same thing." I was happy to hear that.

The Gladiator: I forgot that haha. I forget where we were, but I remember all the boys vowed to "create a new FMW". I had been in FMW a long time, but it wasn't until FMW was reborn that I was able to improve my wrestling skills to help the company grow up.

Hayabusa: Back then it was just how to hit someone with a chair and brawl.

Hayabusa: It's hard for those who receive it also haha.

The Gladiator: It was also the match that Hayabusa hurt himself on the Shooting Star Press.

Hayabusa: That's right. I fell on my chest and blood came out of my mouth. Among Japanese fans, the matches I had with Gladiator in Sapporo and Korakuen Hall are the most legendary.

The Gladiator: I remember Sapporo also. It was a tournament for the title. The Sapporo fans were very excited. The match between me and Hayabusa always captivated the audience. 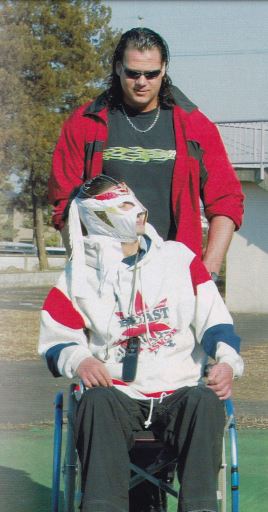 Interviewer: Did you have an impression of young Hayabusa?

The Gladiator: There were many things we made him do while he was a green boy haha. Me, Boulder, and Mark Starr would make Hayabusa get naked and run outside.

Hayabusa: The second match of my career was against Gladiator. The first was with Pandita and the second was with The Gladiator haha. I teamed with another newcomer Flying Kid Ichihara and we had a handicap match with Mike.

The Gladiator: I remember the shaven head of Hayabusa had a rocket fireworks shoved in his ass, I wasn't there, but I saw it in the magazine. I thought he would just be a joke wrestler, but then I saw a singles match he had with Horace Boulder and I saw his rope work and I thought "This guy is going to be good in the future!" then I saw him take an Ax Bomber and thought he lost all his teeth from it. I thought some day I am going to fight this green day and I had a premonition it would be amazing.

Hayabusa: The Gladiator had always been impressive since the first time I fought him as I ate the Awesome Bomb and spit blood afterwards. Mr. Ichihara also lost his memory after the match.

The Gladiator: There were three important people for me in FMW. Atsushi Onita, Hayabusa, and Masato Tanaka. Onita was a big star because Hayabusa and Tanaka could wrestle we were able to have high quality matches. Hayabusa is a tough guy. The truth is Hayabusa and I have different styles. He would always aerial battle with him. New things are good because different things mesh well.

Hayabusa: How was it when you played against Tanaka in All Japan the other day?

The Gladiator: It was the only good match I had on that tour. Tanaka still hits strong haha. His partner Shinjiro Otani was the same as Tanaka. I want to have another singles match with Tanaka.

Interviewer: I think that's feasible with All Japan and ZERO-ONE working together.

Hayabusa: Can I ask you one more thing? When you first came back to Japan you called yourself Mike Awesome instead of The Gladiator. Why is that?

The Gladiator: I came in through Muto's company and he knew me as Mike Awesome in WCW. I saw a program for the tour and it said "Mike Awesome" on it and I told them I was always The Gladiator in Japan Japanese fans also still cheered "Graji! Graji!" when I wrestled. I didn't think the Gladiator named given to me by Mr. Ibaragi would spread so much

Interviewer: That's Kiyoshi "Mickey" Ibaragi who was the W*ING representative. When Gladiator first came to Japan, he worked for public relations for FMW.

The Gladiator: Missing? What happened?

Interviewer: He came back once in 2001 but he has disappeared again. There was information that a witness saw him now working at a convenience store, but when I went by that store to see for myself, it turns out it was a just a woman he thought was Ibaragi.

Hayabusa: I am glad you came back as The Gladiator. It's encouraging for me just for you to be active in Japan. I think we have to emulate what we learned in the FMW era and make it different.

The Gladiator: Yeah, I had a really good experience in FMW, and I've heard that Hayabusa started his own company and are now the president, right?

Hayabusa: Not the president, but I am the commissioner which is different.

The Gladiator: Is that so? I thought you were the President.

Hayabusa: I am aiming for the same thing as when I was in the New FMW, so if I have the chance, I would like for Mike to come to the venue see it. By that time, I will be able to walk more.

The Gladiator: What is the name of the company?

The Gladiator: Oh, I have heard of that promotion. I thought it was just Wrestling Martial-Arts Frontier haha.

Hayabusa: If you win the Triple Crown, my recovery will go quicker haha.

The Gladiator: Haha then I have to win.

Hayabusa: I am so happy to see Mike's face like this.

The Gladiator: Is it okay to see this old face again? haha. You have a daughter right? If you had a son, I would want him to make his debut with my son.

Hayabusa: I will tell her to marry him so then Mike and I can be relatives haha.

The Gladiator: Haha, that would be a weird family. Please send me a message keeping me up to date on you in the future. I want to hear things about you like "I stopped smoking" or "I didn't just make jokes all day today" haha.

Hayabusa: The important thing is to keep trying and to not give up. Never give up. That way, one day I will definitely be in the ring one day.

The Gladiator: I want you to stand in front of me.

Hayabusa: I want to wear my costume in the ring and step into the ring. I have to take one step at a time, but I am really moving forward, and it would be a dream if Mike cooperated with me. The dream of giving me one more thing has increased.

The Gladiator: I'm going to do it. I want to do it now. I remember FMW like it was yesterday. Hayabusa, a miracle is about to happen!