Reporter: How do you feel now that your come back match has been decided?

Takeda: This time, I was away from the ring not because of injury or illness, but because of my heart. I'm in good condition, but I haven't spoken in public for half a year, so I feel a strange tension that I have never felt before.

Reporter: This is difficult to ask, but how did you first find out about what happened?

Takeda: On that day I was out with my t-shirt designer (Sei Ozawa) having drinks and even though I had sent a text to my wife telling her "I am going home" she did not read it. I thought she was already sleeping, but then I got home and saw she had collapsed in the living room. It was after midnight, so I called for an ambulance immediately while still drunk.

Reporter: There were no signs before this?

Takeda: She originally had an intractable blood disease, but until that day she had been completely normal and there were no signs of it. I went to therapy and we didn't talk much that day. We were married for four years, but I have many regrets.

Reporter: What was your state of mind that day?

Takeda: Honestly, it was like the end of the world. As a married couple, there were times we had conflicts, but it felt like I having this bad dream that would never end. I don't feel motivated to do anything, but I have a one and half year old child, so I have to do something.

Reporter: For the time being, you decided to take a leave of absence from pro-wrestling.

Takeda: After that day I was booked for three shows in three days and I had to get in touch with each organization and the people involved. I told them I was going on a long break.

Takeda: I couldn't do anything for the first month, so I moved in to my parents house while handling the funeral and the family registration procedures. I could hardly eat and lost 12-13 kg (26-28 pounds) and I felt like I just cried all day and couldn't sleep.

Reporter: At what point did your heart start to return?

Takeda: Before the FREEDOMS May 3rd Yokohama Budokan show, Jun Kasai contacted me and said, "I have something I want to talk about with you, so lets have a drink together". so I agreed. He said "Because of your personality, you're not going to come back until someone pushes for you to do so. So I will say it now, come back." My heart was moved by Kasai's words, but I replied for him to give me a week to think about it.

Reporter: But you did not end up returning on May 3rd in Yokohama.

Takeda: I was reluctant because my parents are not healthy, so I wondered how it would be like to leave my daughter at home with them and go do professional wrestling while she had started a phase in her life where she acts up when she is bored. I needed to get my surrounding environment in order first. Around this time, Shinjiro Otani also just had an accident and pro-wrestling is sometimes thought of negatively, so if something happened to because I was forcing it, then I thought it would cause trouble and death match wrestling would be criticized. I hadn't sorted out my feelings, so I declined.

Reporter: Did you ever consider leaving pro-wrestling?

Takeda: I thought about it the first month or two. It's impossible to raise a child without working, so I cut off my blonde hair and started looking for a job. I lost interest in everything from my appearance to my hobbies, but it was difficult to ask my parents to watch my daughter when every job I was interviewing for was from 8 am to 6 pm so it was impossible for me to take a full time job. Although there is a hostile relationship, Takashi Sasaki and Jun Kasai continued to take care of me, and Takumi Tsukamoto and Daichi Hashimoto would come to visit me as well. That's why I didn't completely cut off my relationship with professional wrestling. 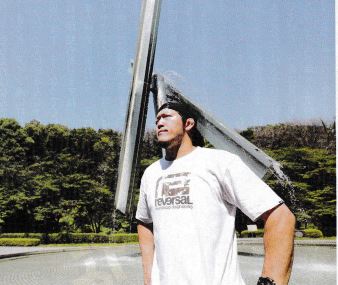 Return to the ring determination

Reporter: What made you decide to come back?

Takeda: The presence of my daughter was huge. She's only 2 now and doesn't know anything. I thought about her wondering "why is my daddy full of scars?" if I have a regular job I would have to have them covered all the time. Since she does not have a mother, I want her to think that she has a cool father.

Reporter: When you appeared on June 23rd in Shin-Kiba, the reaction from the fans was tremendous.

Takeda: During my time as a wrestler, I have reconfirmed that "pro-wrestlers are meaningless unless they enter in the ring" and that this is where I needed to be as I felt that there was someone waiting for me and wanted me to come back even if that was just one person.

Reporter: During this show you also gave the middle finger to ERE.

Takeda: When ERE was first formed, we had a concept. While fighting with Jun Kasai, I understood that if I was good friends with him I wouldn't be able to reach the top. So I put together a unit to break though, but while I was gone a pareja of people and their friends started joining one after another, and the axis was blurred and it becomes an eyesore. Then there was Drew Parker. There is apart of me that approves of him, so it would be fun to fight with him. It seems that he won the GCW Tournament of Survival as well, but I also thought I should have been the one standing there.

Takeda: Because I left Jun Kasai. It's true that he supported me in some ways, but that's a different matter. To return to the world of death matches, I need the scheme of "Kasai & Takeda" to become "Takeda & Kasai" instead.

The return of Masashi Takeda

Reporter: Your return match was decided to be the main event of the Death Match Carnival on July 10, 2022 at Korakuen Hall.

Takeda: Even if I am dissatisfied with ERE, honestly everyone there is first class in terms of ability, and they are perfect as opponents. Daisuke Masaoka is always fun because I can do stupid things to him. My goal is to first crush ERE and then slowly aim for his title.

Reporter: It seems like you are going right for the front line without even a trial run to get back into ring shape first.

Takeda: Some people will say "what will you do if you get seriously injured next time?" I think there are risks no matter what job you do, and I think about my wife, and I think I don't know what's going to happen next. If you are scared of everything, you can't do anything. If you don't fight, you won't have any strength. I am getting older, and I have to protect my daughter in her private life so that she doesn't feel lonely, and I don't know what she is going to think of her father bleeding, but when I show her my back, she will at least know her dad is cool.

Reporter: As I listen to your story I can tell it was a decision that was made with considerable determination.

Takeda: In order to repay the kindness of those who have supported us until now, I have to fight and give courage. Also, as a single father I wondered if there is a message that can be sent to children all over the country who have single parents or have no parents. In about a year, my daughter will be able to communicate, and if I can take her with me, I will try to go abroad again. I would like to challenge overseas again if I can. I want to be able to proudly say "I raised her through professional wrestling" and from now on, I will show you the struggle of Masashi Takeda.